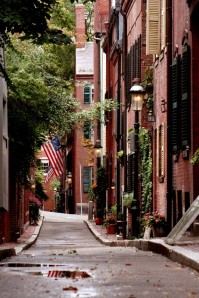 The Boston Lowells knew who they were. From their perch on Beacon Hill they enjoyed a perspective that encouraged them to believe in the Unitarian credo: the fatherhood of God, the brotherhood of man, the neighborhood of Boston. When William Filene opened a discount store in the basement of his father’s store to sell overstock and closeout merchandise through his “automatic bargain basement” (off the rack, serve yourself), Beacon Hill was a swarm of indignation. The son of a (Jewish!) peddler would throw Boston society into disarray. Cheap clothes that looked like finery? Now even Irish women who worked as chambermaids could look respectable. That is, if you didn’t look too closely.

Never to be persuaded without a firsthand look, Anna Parker Lowell walked into Filene’s downtown store near Washington Street, coiffed and umbrellad, sought directions “to the so-called Basement” and took the steps with the polish of someone who was used to grand staircases. Once aground she saw women flipping through racks of dresses like playing cards–choosing, refusing, playing tug-a-war, even threatening bodily harm if a latecomer tried to prise her find away from someone with a prior claim. “Disgusting,” Mrs Lowell tsked to herself. “Just look at them.” 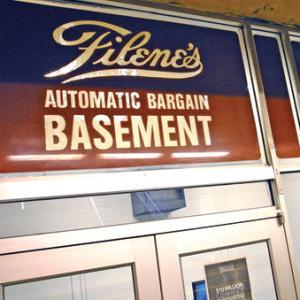 Just when she had satisfied herself that Edward Filene’s brainstorm would mean the end of high society in Boston her eyes lit on a beautiful taffeta gown that looked just the thing for the spring ball at Harvard. She moved closer for a better look. As she reached to collect her prize, a woman of questionable pedigree snapped it from the rack and headed for the till. “Not so fast my dear,” said Mrs Lowell. “I was about to have that dress.” “You was,” said the woman without slowing. “I don’t think you understand.” I had chosen that dress. I was just about to collect it.” “You was,” said the woman, unable to evade Mrs Lowell’s pursuit because of a crowded aisle. “Look here, madam. I didn’t want to tell you who I was, but I will if you persist.” The woman stopped, turned, looked Mrs Lowell in the eye, and said “Ok dearie: Who was you?”

I have always wondered what people mean when they say “That’s who I am,” but usually they mean something silly and parochial: I’m a Catholic, a democrat, a creationist, a car dealer, an ex-con, a neo-con. It’s the substitution of code for argument, a conversation stopper rather than an invitation to discuss a position or idea. Clearly identity matters, but the twentieth century was distinctive in breaking down the sorts of identities that isolated people from majority communities and power structures.

There are big identities and small identities, weak and strong. Part of this has to do with the nature of language and part with the nature of things. Being a democrat or a used car salesman are weak identities: you can change those things tomorrow if you change your mind or lose your job. Being an African-American or a male, despite the fact that we know a lot more about race and sexuality now than we did fifty years ago, still have a lot to do with properties and are much more difficult to change. To say, “I’m gay,” is not just to say “I’m not straight” but to challenge the idea of straight as normative and authoritative. That’s different from saying, “I’m Catholic,” if by that you mean you’re on your way to heaven and the guy you’re talking to is going the opposite way. Beware of anyone who says “That’s who/what I am” with a smile on his face.

Identities can be a great source of fun, as when Ambrose Bierce (the Devil’s Dictionary, 1925) defines a bride as “a woman with a fine prospect of happiness behind her” and “Brute” as husband, or a “minister as “An agent of a higher power with a lower responsibility.” Too bad that in Bierce’s day the Vegan craze wasn’t what it is in the twenty first century, but he did have this to say about clairvoyants: “A person, commonly a woman, who has the power of seeing that which is invisible to her patron, namely, that he is a blockhead.” 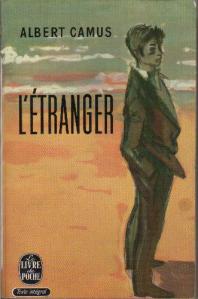 The weakest identities of all are the ones that have to do with what we believe to be the meaning of life. I can remember in college three distinct phases of change: being a socialist at seventeen, a half-hearted anarchist at twenty, and an existentialist at twenty one. I recovered from these infatuations by not permitting myself to stop reading and never reading Camus after thirty. With confusion intact, I went to Divinity School and emerged as confused and doubtful as ever. Voltaire said it was only his skepticism that prevented him from being an atheist. That was me, too.

I can’t doubt that there are “meaning-of-life” identities that one holds passionately and therefore appear to qualify for the “That’s who I am” category of identification. I have known people whose non-belief is as fervent as the belief of a twice born Baptist or Mormon elder, people who say “I am an atheist” as proudly as an evangelical says “I’m born again.” It’s tempting to say, isn’t it, that the difference between these two statements is that the atheist is smart and the Born again needs his intelligence quotient checked. But we all know that identity statements are code for a whole range of ideas that need to be unpacked and call for explanation. An atheist who felt his non-belief in God entitled him to murder children because of the absence of divine commands to the contrary would be no better than a cult member who believed that disobedient sons can be stoned because it says they can in the Bible.

I feel my Atheist Reader squirming, because while you liked the Bright-Dim difference, you don’t like equivalences. When Katherine Hepburn turns out to be an atheist people say, “I just knew it. Such a strong woman.” When Pol-Pot says God is bunk, we think “Well that’s different, isn’t it—and so far away?”

Personally, I don’t like people who say “That’s who I am,” or “That’s what we are,” or “We need to be honest about who we are.” At a crude level I want to say WTF? It’s eerily metaphysical when atheists do it—not only because it’s the language God uses when he introduces himself to Moses on Sinai. You remember, right?: Moses hasn’t been properly introduced and God says, “That’s who I am,” and when pressed after Moses accuses God of being slippery says “I am what I am.”

I reckon what he really means is, “You know—God—the one who does firmament, landscaping, Leviathan, floods, human beings God.” In fairness, however, the Hebrew Bible insisted that God was not just a proposition but an actor on the human stage. I don’t believe that God did any of the things ascribed to him in the Bible, but to believe in a doer and deeds is a perfectly legitimate way to establish an identity—even if it’s a fictional identity. That’s why Jewish atheists begin by denying the deeds and then the doer. None of this silly ontological stuff: too Christian, too mental.

But I find it a lot harder to know who I am or what we are on the basis of not believing something.

“We need to be honest about who we are” coming from an atheist doesn’t translate easily into the propertied descriptions of being black, gay, female or physically challenged–things over which people have no choice and no control.

It’s tempting, I know, to think the things we believe or don’t believe have the same status as the things that constitute us as persons or collectives of persons. But you would laugh at a used car salesman saying at dinner, “Dammit, Mother, I’m tired of hiding from who I am. Tomorrow I’m going right into the boss’s office and say to him, ‘Mr Jones: I am Bill Smith and I’m an atheist.” You would not laugh at someone who said, “Mr Jones: I haven’t had a raise in two years. Is it because I’m black?”

Atheists often complain when religious groups claim special treatment on the pretext that any speech against religion is defamatory while claiming equivalent protection for their own beliefs. But atheists need to be very careful about traveling the road of victimization and minority rights or simply adopting the legal definitions supplied under non-discrimination laws. Especially when racial, sexual orientation and gender provisions do not apply to atheism and the protection accorded to religious beliefs, if embraced by atheists, creates a stew of issues–not the least of which is that there is no settled definition of atheism and if there were a true freethinker would reject it.

Difference is deceptive, especially when it comes to self-definition. Is coming out atheist like coming out gay, an act of courage? On what basis–the fact that terms like “minority,” “unpopular” and “misunderstood” can be applied to both categories? But simply to embrace a minority position toward a “divine being” based on denying a premise is not an act of bravery. It doesn’t make you who you are or what you are. It’s neither race, profession nor party platform—not even a philosophical position or scientific theory. It’s not something to be ashamed of or proud of. It’s just about an idea—even if it’s a really Big idea.

2 thoughts on ““Who was You?” On Hiding from What You Are”