Nothing puts atheists in a worse mood than the holiday season. All these dimly-lit people and brightly-lit window displays, making merry over things that never happened, spreading lies, propagating falsehood, singing their rancid carols, and worst of all teaching impressionable, if rather preposterous, children to believe in intellectual crap when they could be playing Megaman 11 or Worms Reloaded–which they got last Christmas. How obscene, how humiliating: Behold, little Buddy praying by his bedside for Megaman, versions, 12-16 (“conveniently boxed as one item” from Amazon.com) to a non-existent deity, having just lodged the same request with the sex-offender in the Santa suit at the mall. No wonder America is going to the red dogs and blue dogs. “Isn’t anybody listening to the Voice of Reason?”

God to a six-year old

Help is on the way.

To combat the forces of Darkness and Superstition, the American Humanist Association and some allies have launched a new ad campaign to put the Grinch back into Christmas. An article by Laurie Goodstein in the New York Times charts the new ecumenical spirit of the quest, spearheaded by the same blithe folk who brought us the “Good without God” bus-o-rama and the “Just be Good for Goodness Sake” billboard extravaganza. The campaigns are financed by “a few rich atheists” with money to throw to the wind, and buoyed by research being done by the Greenberg Center for the Study of Religion and Public Life (Trinity College), headed by the eminently reasonable Mark Silk and based on Barry Kosmin’s American Religious Identification Survey, showing that as many as 15% of Americans are “Nones,” i.e., have no religious identification or association.

It is pretty obvious and at the same time hopelessly obscure how Nones relate to atheism (atheists hope they do: this is largely, sad to say, a recruitment push for membership and dues), but as Goodstein points out in her article, the combined membership of the sponsoring organizations numbers only in the thousands. The best course might be to see whether Nones can be divided into groups: Certainly Nones, Possibly Nones, and None Just Now, Thanks–but I mix my politics and religion, which is never a good thing.

I will be blunt: This whole business is idiotic. It is hard to imagine that people like Todd Stiefel, one of those well-endowed atheists with cash to burn, are really on a rampage because of passages like the one he cites from the Bible:

“The people of Samaria must bear their guilt, because they have rebelled against their God. They will fall by the sword; their little ones will be dashed to the ground, their pregnant women ripped open.” (from Hosea 13:16, New International Version).

Reassuringly if a little obtusely Stiefel says that “It [our democracy] has not been based on [verses like these] and should never be. Our founding fathers created a secular democracy….We must denounce politicians that contend U.S. law should be based on the Bible and the Ten Commandments.” I agree. Anyone who wants Hosea 13 added to our Bill of Rights should be tied to a chair, gagged, blindfolded, and made to listen to Diane Rehm read slowly through the whole Book of Leviticus. Presumably (or is it implicitly?) he is willing to throw serous money at billboards so that America does not become a country that kills babies. He will find many friends among Catholics and Evangelicals on that score.

If you think ripping open pregnant women is bad, read the story of the wandering Levite in the Book of Judges (ch. 19) where a consummately self-absorbed kidnapper–a Hebrew–offers his concubine to some Village- of- the- Damned- crazed youth who want to have sex with him, gang rape her, leaving her for dead–whereupon the Levite butchers her semi-conscious person into twelve pieces and forwards a limb to each of the twelve tribes of Israel. Please: Don’t quote Hosea to me when there are passages that would make Tarantino wince. 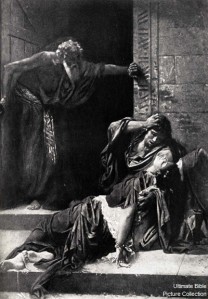 But to be serious: Do the sponsoring organizations (which include besides AHA the American Atheists and the Freedom from Religion Foundation) think that these stories are read to Christian (or Jewish) children at bedtime? Is it bloody likely that a craven priest in Spokane is going to substitute the Legend of the Lethiferous Levite for St Luke’s Nativity story on Christmas Eve? I know that atheists feel they know a great deal about the mindset of the religious principles they reject, but one has to wonder why this isn’t reflected in their anti-Christian strategies?

Or are the campaigns only a reflection of the sponsors’ shocking ignorance of ancient myth and legend, whereof the Bible is a treasure hoard. I get the sense that the sponsors need to begin with the Brothers Grimm and then read backward in literary time to get a sense of how the grotesque has been used in history for both entertainment and moral instruction. Most “reasonable” people who are slightly sophisticated about the contours of culture know this. Many very nice religious people know this. They know that scaring people to death has been used by religion and nasty aunties for a long time to get people to change their wicked ways, clean up their act, and lead a better life. The question is, why don’t atheists know it? The shock of discovery seems entirely their own; it will not surprise the educated or awaken the irreligious passions of a Certainly None.

We don’t do that any more–scare people to death to make them good. Even very religious people don’t do that any more. The last really good sermon on hell was preached in 1917 by the torture-obsessed priest in Joyce’s Portrait of the Artist. And I can’t name the last time I heard a robust sermon on Hosea 13.16. Given that real life lascivious priests are frightening enough, it seems unnecessary to reach back to the first millennium BCE for material. 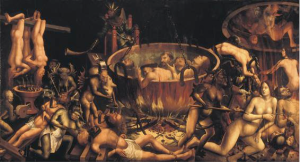 The intellectual isolation of the atheist from wider cultural movements and shifts in perception is one of the great stories of our time. Almost no one is covering it. If the question they are asking about religion is, Don’t these damned believers know what’s in the Bible, the answer is somewhere in the range between probably not to possibly so; but even if they do, they probably know that the Bible is not recommending carving up your girlfriend. And probably can guess that when you find blood and gore of this magnitude the story is about something else. Phrases and words like “symbolism,” “surface meaning,” “allegory,” “folk legend” and “myth” come to mind. Put it under the heading “Things Atheists Missed in College,” along with a good course in comparative religion, ancient history, mythology, and anthropology. It’s only people who have never studied myth who can write in such a yawningly banal way about religion being one.

I find myself constantly challenged on panels with atheists to lecture them on their understanding of words like “superstition,” the “supernatural” and above all “myth.” They in turn find me niggling and pedantic. But really, does the average atheist, village or city style, assume that the toxic texts of scripture are “in” the Bible for moral edification or because they reflect a time and culture different from lunchtime in Chicago?

Which brings us to the question, Who are these ads for? We’re told that a key reason for the aggressively confident style of the campaign (not to mention the unusual spirit of ecumenism that currently reigns in the atheist camp), is owing to their determination to get their “market share [of the Nones].” Leaving the most grievous puns aside, they are also inspired by the need to resist the Myth of the Not Lying Down Dead Horse, that America is a Christian Nation. And as we all know, there is nothing like a Billboard over the Lincoln Tunnel that announces, “You know it’s a Myth. Believe in Reason.” to get uncommitted people thinking and committed people scrambling for the nearest AHA meeting. Add a Hosanna to that and you’ve got something. (Tip for vandals: Spray paint “I’m Lucifer, and I approve this message” on the sign.)

In a particularly poignant way, weary commuters will also be treated to the cheery salvo of The United Community of Reason (not to be confused with Christians United to Oppose Rationality), a group in Washington. Their idea of decorating for the holidays includes spreading the good news of Reason on billboards and ads on bus shelters in about 15 cities: “Don’t Believe In God? Join the Club.” Fortunately, number-wise, the club can actually meet in the bus shelter. Add a few Nones and they can meet at a subway stop, except in cities where there are subway stops no one gives a rat’s whisker about organized atheism.

Far be it from me to lecture atheists. But please accept, along with an eggnog salute, the following advice. Grow up. Learn a little about what Being Clever means. I know we live in a world defined by short attention spans, coffee mugs, T-shirts and bumper stickers. But it’s completely unclear to me whether your ad campaigns will change a single mind, or even whose single mind your campaign is designed to change.

This is not a “struggle.” The upward march of unbelief is not the forces of liberation against the sources of slavery and oppression. I’m afraid religion beat you to that metaphor. It’s called Exodus. No one is paying attention because no one except your club members actually cares about the private conclusions of people who want to turn being disagreeable into a civil rights event.

The slogans are insipid and can only have been vetted by very small committees of Like-minded People–and that’s a real problem, The modern atheist seems to get off on being distaff, minority, contrary, and ornery–the legate of a long free-thought heritage. Would your heart beat faster if you could persuade society that overturning a Salvation Army worker’s collection pot is an act of charity–extra points for snatching the bell? Would you praise a convert who defaced a nativity scene at Christmas, or saved a turkey’s life at Thanksgiving. Don’t be ridiculous, you say: that’s not what this is about. Don’t be ridiculous, I say: this is what you have made it.

Give up using the name humanism. You’re ruining it for people like me who don’t mean by it what you want it to mean. Equating atheism with humanism is a cheap trick, a cop behind the billboard (maybe one of yours?) kind of trick. Be proud of being an atheist. I know I’m not. You are not the American Humanist Association. You are full- frontally and outwardly the American Atheist Association.

And stop this ridiculous invocation of secular saints from Socrates to Einstein. Virtually none of the people you pray to became famous for being atheists and you know it. Not even Darwin. Certainly not Socrates. And Einstein: who knows?

“Yes, you can call it that,” Einstein replied calmly. “Try and penetrate with our limited means the secrets of nature and you will find that, behind all the discernible laws and connections, there remains something subtle, intangible and inexplicable. Veneration for this force beyond anything that we can comprehend is my religion. To that extent I am, in fact, religious.” (Quoted by Isaacson in Einstein, 2007)

1933, on a deserted beach in Santa Barbara, California

But the point is, you cannot claim the intellectual upper hand in arguing against “God and religion” and then resort to the authority-argument to win your case. Even if you were joined by all the Nones in America, yours is a lonely lot. Especially at Christmas. Accept it. Live with it. And take down those absurd posters.