I have received an extraordinary number of replies to this which apparently missed the fact that it was satire directed against billboard campaigns and anti-Christmas warriors like Audrey. So in the spirit of good will let me endorse Jim’s response: “If we are going to criticize and detract religious charities, we had better be ready to vigorously create and support alternatives. Only when atheists and agnostics start opening their own soup kitchens and shelters will this kind of protest ever be anything other than cruel.”

Exactly! As to satire, I am only slightly encouraged that Jonathan Swift’s Modest Proposal (1729) was similarly taken for serious. [jh] 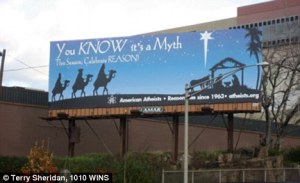 I am naive about the cost of billboards but luckily I have secular friends I can call or tweet to on the subject.

I want to buy one. Just for a few weeks (maybe there’s a discount for signs after January 2nd.)

Mine is going to say “Hey moron! Do you feel any richer now that you blew all your money on God?”

My first idea was to paste a huge picture of Peter Pan, preferably Disney’s (face recognition) next to a picture of Jesus in the manger. It was going to say “Grow Up!” But my friend Scipio said the point was oblique. 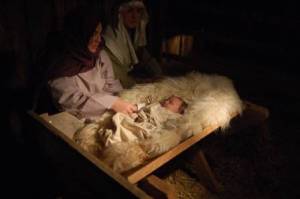 I don’t know what that means, exactly, but Scipio is pretty smart. And getting the rights to anything Disney would be expensive.

My inspiration for this was seeing a woman and a little girl coming out of Walmart on the weekend, toting their Christmas goodies. My stomach churns when I see sights like this. The little girl reached into her pocket for some change to throw into a Salvation Army pot. She smiled at the worker. The worker smiled back.

Fortunately, a member of the local Students for a Secular Season named Audrey intervened. I used to teach Audrey. She is very committed to every cause she takes on. When I knew her, she was a member of the Campus Crusade for Christ and used to hand Bibles out on the quad. Then she saw the light and was transformed. I think of her as one of my success stories.

“Not so fast little girl,” she said with a firmness that would impress anybody. “Just what do you think you’re doing?”

“That’s none of your business Miss,” said a lowering black woman next to the little girl. “My niece wants to spread a little joy. We’ve always believed in helping others out. Especially in these times.”

The little girl stood with her fist clenched, not able to release the offering into the pot. The Salvation Army worker stood helplessly by and looked in my direction. I have to say, I felt a little awkward.

Audrey stood her ground. I knew she would. “This is between me and your niece,” she said. “She looks like she can speak for herself. Little girl, Did your aunt tell you to give money to this stranger?”

“Are you giving it to this woman just because she is ringing a bell. That’s called coercion, you know. Would you give me money if I rang a bell at you?”

“”Why not?” Audrey was clearly taken aback. “Is it because I’m an atheist.”

“A what?” the little girl said.

“An atheist. I don’t believe in God. I don’t think you should give money to strangers just because people ask you. Just because it’s Christmas. That’s not reasonable because God doesn’t exist and there wasn’t any Jesus.”

By this time a crowd had gathered and the student SSS van had come to collect Audrey and take her down the road to Target, where the Knights of Columbus hung out. It sported a banner that read “You KNOW it’s a Myth.” In silhouette it showed the three wise men following the star of Bethlehem, and just beneath, “This season celebrate reason.” Audrey straightened her hair, tugged her coat tight around her and prepared to climb on board. The six passengers had broken into a chorus of “O Come All Ye Salesmen.” The crowd had begun feeding the Salvation Army Kettle doses of dollar– even five dollar–bills. Superstition is never-ending, I thought to myself.

“If you got an awesome hat I’d give you money too. You’re pretty. I love your hair. What did you ask for for Christmas? I’m asking for hairclips and some new notebooks and pens. Auntie couldn’t get them for me. She hasn’t worked since August.”

Audrey tried to smile, but I could tell, it wasn’t her best moment. She always had an answer. I haven’t seen her since to tell her what I was going to tell her: You have made a difference back there. That little girl needed to meet you.

Just to make my point, I opened my wallet, counted all my bills in front of the Salvation Army woman, and returned it to my back pocket. I walked away feeling good, thinking about better billboards.

I know a thing or two about changing minds.