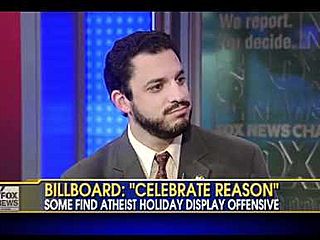 Atheism is badly served by the likes of a stammering David Silverman, recently made mincemeat by an intellectual third-rater on Fox News.

Richard Dawkins & Co. invented the term “Brights” to describe non-believers in general. A price on their head for those of us who have been disgraced by this episode.

Now we are confronted with a new phenomenon: Atheist Dims. –Spokesmen [sic] who think an adequate description of religion entails the axiom that all people who take the idea of God seriously actually believe in a great Watchman in the sky who takes an interest in my personal hygiene. They don’t speak for atheists, and they don’t speak for me.

No wonder the billboards are so wasteful, not only conforming to a ‘fifties Impeach Earl Warren aesthetic, but simply dumb, as they degenerate from “You Know its a Myth,” American Humanist Association message to “You Know its a Scam,” American Atheist-style. Interesting and totally cynical change of tone: the sort of thing you get in bad music.

Atheists will not make friends or influence people by suggesting that religious persons are morons. Some are. Many aren’t. Worse, their vaunted intellectual superiority is too reminiscent of the evangelical’s vaunted spirituality. And both claims are based on premises as leaky as cheesecloth.

And then there is the puling defense of this uglification of the landscape: that you are really not preaching to religious people but to people who privately entertain doubts about religion. Please get back to me with the testimonials and statistics when the stats come in. Most of human life is lived in the spaces between what we would like to believe and what we cannot say openly. Everyone who has been married on paper but visited other sheets knows that: Why don’t the American Atheists, and why don’t they know this about religion? Or do atheists leave doubt and skepticism behind when they arrive at their position?

And even if your Dawkins-avatar whispers to you that you are the Brightest shining star, even if at night and in your left ear, be mindful that history has laid to rest countless asserverators of the idea that God is dead, senile, useless, out to lunch, gone fishin’ or the invention of paltry minds.

Silverman does one thing more that I will get to presently: He has also come up with the barking idea that it was all done consciously and with premeditation: as a lie.

Oh my goodness. Can you imagine the apostles or servitors of the Prophet planning the coming millennium around a campfire, when politicians in Whitehall and Washington can’t set policy for the next two years?

I thought not. Religion is a “lie”–maybe–in the sense that many of its cardinal tenets cannot be supported by modern science. A premeditated lie? Give me a break.

The challenge? The atheist “movement” must disown Silverman as a fool. Or acknowledge that what they are now facing is a huge fissure in the ranks between hard, foolish, trendy unbelief, Guanilo-style, and soft, educated unbelief. What we are witnessing is an outbreak of atheist piety, a conviction that unbelief is self-evidently true. We used to call this faith, not logic. Tell me where I’m wrong.

The real Brights are not atheists. They are the ones who know that science is not a messiah but one way of knowing about the good, the true and the beautiful, and a way that cannot exclude religion and the religious imagination.

Shame on religion for abusing the gullible, the vulnerable, the innocent, for political or monetary gain.

Shame on the Atheists, old and new, for their copycat tactics in exploiting science, subverting humanism, and convincing ill-educated followers that their argot is supreme and needs no further discussion when, down to an individual, they know this is not true or honest.

First of all, I refrain from mentioning any names or organizations that can properly be called atheistically thick-headed. They know who they are. I’ve named them before, without salvific effect. They are proud of who they are. They like their atheism short, sweet, rude, and raw. If they get on people’s nerves, that’s okay because religion gets on their nerves. Who can disagree? The standard cable network service, before they cut you off entirely … Read More

via The New Oxonian

31 thoughts on “Of Atheist Tribes: A Repost and Riposte in Honor of David Silverman’s Foolery”