Paul Kurtz, PhD, is the founder of the Center for Inquiry, the Council for Secular Humanism, and the Committee for Skeptical Inquiry.  He is also the founder and for almost thirty years editor in chief of Free Inquiry and the Skeptical Inquirer.  The author of dozens of books and hundreds of articles, both learned and popular, Paul Kurtz resigned from the organizations he created in 2009 in order to devote himself fully to the ethical dimensions of secular and humanistic thought when the board of the Center decided on a militant atheist agenda unrelated to the historic strengths of the organization.  Dauntless, Kurtz founded the Institute for Science and Human Values and a new journal, The Human Prospect, which is now in circulation.

Kurtz’s Statement of Neohumanist Principles has now been endorsed by over a hundred of the world’s leading humanists, philosophers, scientists, and public intellectuals.

In this excerpt, Kurtz explains the difference between secular humanism and atheism, insisting that a key task of the nonreligious humanist must always be the free and critical examination of religion. 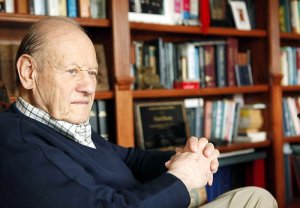 Secular humanism and atheism are not identical. One can be an atheist and not a secular humanist or humanist. Indeed, some thinkers or activists who call themselves atheists explicitly reject humanist ethical values (for example, Stalin, Lenin, Nietzsche, and others). Nor is secular humanism the same thing as humanism by itself; it is surely sharply different from religious humanism.

I should also make it clear that secular humanism is not antireligious; it is simply nonreligious. There is a difference. Secular humanists are nontheists; they may be atheists, agnostics, or skeptics about the God question and/or immortality of the soul. To say that we are nonreligious means, that is, that we are not religious; ours is a scientific, ethical, and philosophical life stance. I have used the term eupraxsophy to denote our beliefs and values as a whole. This means that, as secular humanists, we offer good practical wisdom based on ethics, science, and philosophy.

The term secular should make it clear that secular humanists are not religious. In contrast, the term religious humanism is unfortunate. It has been used by some humanists to denote a kind of moral and æsthetic commitment to a set of ideals and practices; but this is most confusing. Often it serves to sneak in some quasi-spiritual and/or transcendental aspect of experience and practice, aping religion.

Secular humanism is nonreligious. But this does not mean that it does not criticize the claims of religion; indeed, we have a moral obligation to speak the plain truth. There is a difference, however, between being antireligious—attacking religion or dismissing it cavalierly—and being willing to analyze religious claims and calling them to account for their lack of reliable empirical foundations. Biblical and Qur’anic criticism are essential to intellectual honesty and clarity; and so, secular humanists are able and willing to submit the claims of religion-particularly where these are relevant in the open public square-to critical scrutiny. To shy away from this would be dishonest.

Accordingly, secular humanists are nonreligious critics of religious claims, particularly where these intrude in public policies and beliefs. Surely theistic religions today attack secular humanists and naturalists without compunction. In contrast, secular humanists have a responsibility to truth, to respond and to present the outlook of secularists and the ethics of humanism in clear and distinct language.

Secular humanism is thus committed to science and reason as the method of evaluating all truth claims, whether arising in popular belief, scientific theories, or in moral, political, or religious claims. Similarly, secular humanists are sympathetic to skeptical inquiry-that is, the application of rational methods and empirical/experimental testing to all claims to truth. For that reason, too, secular humanists cannot understand why religious humanists so fear to step on the toes of their religious brethren. Similarly, secular humanists are critical of those contemporary skeptics who express trepidation about treading in religious waters. Surely, skeptical epistemology means that there is open season on any and all claims to truth; all are subject to empirical and rational scrutiny. Critical thinking should not be confined to paranormal claims alone, which might be considered safe to criticize. In principle, critical thinking should likewise be applied to religion, politics, economics, and morality.

What is central to humanism, in my view, is the ethical component; namely, humanists believe that:

Clearly, secular humanism is not equivalent to atheism—it is far more than mere unbelief, since it stands for affirmation and not merely negation. Similarly, secular humanism finds itself at odds with religious humanism, since its outlook is clearly nonreligious. It goes beyond any negative skeptical inquiry insofar as it seeks to provide a positive and affirmative alternative to customary moral and religious practices.