(c) 2011, extract from from The Fall and Winter of Secular Humanism 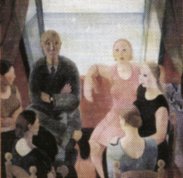 In 1921 Luigi Pirandello wrote an absurdist drama that became his landmark contribution to twentieth century literature, Six characters in search of an author.  In the play according to the playwright’s instructions, the six ownerless characters enter from the rear interrupting the rehearsal of another Pirandello play. A “tenuous light” surrounds them—the “faint breath of their fantastic reality.” With embarrassment, the Father explains to the angry Manager that they are in search of an author. When the Manager replies that he has no time for madmen, the Father rejoins that he must know that life is full of absurdities that do not need to appear plausible since they are true. To reverse this process is the madness of acting: that is, “to create credible situations, in order that they may appear true.”

Every religion, every political system, exists to soften the inherent absurdity and ultimate cruelty of life, and to create a reality that appears true to believers: one–society or government–is not more “plausible” or true than the other–religion or philosophy.  Both, over time, have been in the business of producing the artifice of civilization and culture that we regard as the primary location of human beings. As Freud recognized, we create culture at the expense of freedom.  We maintain it at the cost of self-actualization.  The stage-set we call civilization, the set we built for ourselves through collective and largely unconscious struggle, is no more real than the stage sets Pirandello’s characters create for their own temporary existence.

True, we have developed the wherewithal to change the set, learned to expand the horizons of civilization beyond the wildest dreams of our ancestors, and developed systems of decryption that answer questions about how the set works, how we ourselves are constructed, how we have evolved. That is what science is.  The frantic search for an author: that is what religion is, and like the characters in Pirandello’s drama, without that knowledge the attempt to construct our life is limited to piecing scenes together: “Thus, sir, you see when faith is lacking, it becomes impossible to create certain states of happiness, for we lack the necessary humility. Vaingloriously, we try to substitute ourselves for this faith, creating thus for the rest of the world a reality which we believe after their fashion, while, actually, it doesn’t exist.”

The death of any movement begins with fissiparation.  Almost instinctively, early Christianity even before it was a force to reckon with, knew that the essential threat to its existence would come from those who differed over the finer details of the faith–not from Jews or pagans who rejected it wholesale.  Christianity succeeded organically well into the Renaissance by insisting on a core message and core ritual practices and belief.  The creeds–self-referring statements of faith–of the ancient churches may have cost it a few friends, but created a bureaucratic structure that has lasted centuries longer than equally unwavering philosophies such as communism and national socialism.  That is not accidental, because while the basic needs of people in relation to society are as simple as a loaf of bread or a supply of water, the needs of people in relation to religion are as fugitive as ideas of God and eternal happiness, and failure to fulfill them more difficult to see as a negation of religion’s promises.  The government that cannot provide bread will not survive for long.  The religion that cannot provide God will simply change the nature of the search or find new places to look.

When the Christian church in the west did break apart in the sixteenth century, it did so for two reasons: first, Rome had lost the power to control dissident opinion as effectively as it had in previous centuries.  There were various reasons for this, but the main one was distraction.  Since the late Middle Ages, popes had been forced to defend their claim of political superiority and territorial rights against a half dozen ambitious princes who had come to see Rome as a political rival to their own national agendas.  Though the quarrels (known officially as the Investiture Controversy) always were coded in theological language, the secular aspirations of the opposing powers was plain. Compromising on some theological issues was always seen as preferable to alienating powerful allies on which the papacy depended for its own prestige.  The only question was whether the state exceeded the Church in power or whether the spiritual authority of the church was superior to the powers of prince and magistrate.  There was no talk of “abolition” of one by the other because the power of each was derived from a common hierarchy that required God, as celestial sovereign, at the top

Second, however, Rome itself was in spiritual and moral crisis.  What is often said erroneously about the moral decay of Rome at the time of the Christian insurgence of the fourth century can fairly be said about Christianity in the sixteenth century, at the beginning of the protestant movement. While centers of culture, intellectual vigour and reform certainly existed, the Church of the commoners was characterrized by superstition, enforced credulity, and doctrinal rigidity.  Luther’s purview in Wittenberg as a  university professor established him as one of the enlightened, but his agonized concern for the latter made him a reformer.  It was this unique combination of intellectualism, concern for the moral condition of the church he served, and the distractedness of the church that made the reformation possible.

The patterns established by the rupture continued: no longer subject to governing authority, a message control center, protestantism devolved into a hundred competing theologies and practices.  The charismatic, quietist, and Evangelical streams of practice already stood at the outflow of the Reformation and continued through the twentieth century.  They were not the end of the process. The Church of God in Christ, Unification theology, Jonestown, fundamentalism and Dominionism all lay ahead.  Each one of them (like their 16th century prototypes) claimed to possess the correct recipe for church-state relations.  Increasingly the conservative protestant movement became convinced that that recipe was expressed in the symbolism of Israel’s rejection of God in favour of monarchy (or sovereignty, or big government), and called for a return to the humility, obedience, and faithfulness they thought characterized the people of Israel before they became rebellious, arrogant, and sinful. By 1954 the question of God, at least in the United States, had become inseparable once again from the question of the powers of government.

[Next: The secular movement in Europe and America]

2 thoughts on “How Atheism Lost the War of Ideas”