Being newly translated out of the original Dalmatian based on Cyrillic manuscripts thought to derive from Greek or perhaps Ethiopic sources.  We’re not sure.    By Alistair Mainly-Bluster, MA (Oxon.), CPA (Leeds)

Scene:  Somewhere, not in the forest.

Socrates:  And so Glaucon, we have examined piety, the state, justice, beauty, and the good.  Yet one thing remains.

Glaucon:  I think we’ve covered it all Socrates, and I’m hungry.

Soc.:  I don’t do loaves and fishes dear Glaucon; that motif will appear in later days.

Glau.: What yet remains Socrates?

Soc.:  The question, What is humanism?

Alcibiades:  We should put it to Diotima.  I like her stories and she still possesses a certain sensual charm, for an old woman.  Besides, if we settle it here everyone will say, Well, that’s just what a bunch of oversexed Greek men would say, isn’t it?

Simon:  Pray, Socrates: What do you mean by “humanism”?  Do you mean the craft of being human?

Xenophon:  I think he will say it’s the art of being human, for art is only the higher form of a craft, that which responds to beauty and our animal soul is our human soul.  It should be possible therefore to talk of dogism and cowism as the craft of being a dog or a cow.

Alc.:  You are such a prat Xenophon: I predict you will write history and memoirs.  He must mean that humanism is the practice [πράξη] of humanity, the realisation of what it is to be fully human. Besides, we have an absolutely terrific word for practice in Greek.

Xen.:  I don’t think he’ll go there, Alcibiades.  For one thing Aristotle is already working on the problem and he wants to call fully realized humanity ”happiness” [ευτυχία].   It sounds awful in English but brilliant in Greek.

Socrates:  Dear friends: discord is the uninvited guest at the harmonious wedding of Beauty and Mankind. Let us begin, as always, with what seems clear to all of us and go from there.  If we say inelegant or erroneous things, Plato can scratch it out later.

Glau.:  As always, proceed Socrates with your lesson.

Soc.:  Well then: Is humanity not a word like justice and beauty.

Simon: It is.  Or maybe you are trying to trap us.  I will therefore say, it isn’t.

Alc.:  Simon, listen to his inflection.  He expects us to say yes.  Yes, Socrates.  It is the name of a class or virtue.  It is an abstract noun, a κατηγορηματικός as we say in our almost perfect language.

Soc.:  And how does humanity [ανθρωπισμός] pertain to these things, I mean the ideas–as greater to lesser or lesser to greater.

Alc.: I think as greater to lesser since humanity is needed for the perception of beauty and the exercise of justice.

Soc.: So it might appear.  But we have seen that beauty and justice, the good, and truth,  exist quite apart from our apprehension dear Alcibiades.  If this were not so, then how could we recognize them?

Alc.:  That is not a question for us, Socrates.  It is a question for cognitive science, and our survival and adaptation as a species has made these things necessary.  I’m just guessing what others will say.

Glaucon:  You speak like a mad man Alcibiades.  Surely,  the only question is whether “humanity” perdures in our souls or resides in the intellect alone.

Soc.: Dear friends, remember that we are ancient Greeks, not modern Americans with deceptively impressive credentials in brain science, nor Bible-thumping fundamentalist Christians from Bethula, Georgia.  Try to follow me.

Simon:  I think he means he wants us to brainstorm this. 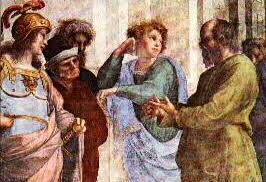 Alc.: Then Socrates: I say the relationship to the ideas is between lesser to greater–that humanity is fulfilled in trying to comprehend the ideas and humanism is nothing more than humanity trying to achieve this end in truth.

Xenophon:  Too general.  No wonder you never invite Democritus to our parties. He could explain–sorry, Socrates–propose–that the sole truth is the truth of nature, and only that: that which we see, measure, do the numbers on–that kind of thing. Only a truth that is true to human nature can be valuable for humanity.

Soc.:  What is the value in that my dear friend?   Is humanity a measuring rod, intellect a gauge, knowledge a scale?

Simon:  Yet Socrates, justice herself is often shown as blind with a scale in her hand.

Alc.:  Good god, Simon: it’s an image.  We covered images last year when we wrote the Republic. Justice is nothing like that.

Simon:  Is she not beautiful?

Alc.:  Yes, Simon, very beautiful, but she is not a she, she is not blind, and there are no scales except the ones on your eyes.

Xen.:  Would Socrates agree that a part of humanism is to teach the gods, I wonder?

Xen.:  Democritus says they are of no consequence.

Soc.:  I have little to say on the matter as you know. We have said that some ideas are like dreams, and that with relation to knowledge they are false [ψεύτικος]–illusions or perforations of the sublime.  It may be the gods are like that, and it would be the task of humanity to find the truth of the gods.

Xen.: It would then be the task of humanism as the practice of humanity to deny the gods as illusions?

Soc.:  You seem to know my thoughts better than my words do: Tell me, Xenophon–or is it the daimon of Democritus I am speaking to now–tell me: have we seen the gods?

Xen.: No Socrates.  Some seers claim to have visions, but in your philosophy dreams separate us from truth.

Soc.:  But having never seen justice and only seen the laws and penalties of corrupt men and legislators, you yet believe justice exists?

Xen.:  Socrates, you yourself say so.

Soc.:  Yet in seeing the world, apprehending beauty and seeking good amidst its many imperfections you find it necessary to deny the gods, who are said to crave these things as much as you?

Xen.:  It would depend on how great their knowledge, Socrates, the degree of their goodness, their power to avert harm or change hearts.  I would say that if such gods existed, then it would better to scorn and despise them than to affirm their inconsistencies.

Soc.:  Precisely, and fortunately for us, Xenophon, no such god exists and thus it is not a matter for humanity.

Alc.: You are saying that the gods are of no concern to us Socrates; and that is also what Democritus says.

Soc.:  I am saying that the gods are in the myths, like the scent of minthe is in the air. The myths carry them upward and they alight on our consciousness.  They are sensed and felt, intimated if you will, but not perceived.  They are not the objects of knowledge, and for that reason we cannot fear them, obey them, seek after them, or follow them.  Their influence is subtle and our humanity knows them only in this way.  Of course, lesser men read the myths, as Xenophon will know, as chronicle.  Zeus is angry and killed legions of men.  Hades tempts the daughters of men into his lair.  Poseidon destroys the plans of navigators in his fickle way.  But these are not the gods, Xenophon: these are monsters and illusions, the stories of our infancy.

Simon:  Poseidon is always my favorite, especially where Homer says “He tossed his curly locks, his great head,” just before he swamps Odysseus. Pure magic. Can’t you just see it? Xen.:  You sound more like Democritus than Socrates, Socrates.  But in my calculation a myth is the opposite of truth.  The gods are real or not real.  If only their stories exist, then they are not real.  I do not smell them in the evening breeze.

Soc.: “Real” my dear Xenophon?  What kind of word is that?  Is it from the future?  Does real mean valuable, or is it one of those things that your definition of humanity as a measuring machine requires? Our life as humans is lived between the real and the not real and between what we see and what we can imagine.  I have said that the gods do not threaten, cajole, command, or punish.  They do not create. The poets have said, the gods are immortal, and we have imagined them this way. It is entirely appropriate to forego any discussion of the gods in our study of humanity because humanity is the study of what is mortal.  But it is more than the study of what, to use your word, is “real” [ πραγματικός]

Xen.:  Socrates, I will not rest until you declare the gods false [ψευδής] for if they are unnecessary [περιττός], then they are false [πλαστός].

Soc.: What logic is this, dear Xenophon, when you change terms like horses running away from battle? There is much that we do not yet perceive  [βλέπω] that will become necessary [αναγκαίος] when we perceive [αντιλαμβάνομαι]  it.  What you don’t perceive is hardly unnecessary [περιττός]; it is merely unperceived [άγνωστος].  Bring Democritus by all means.  I will happily wait for his corrections.  But the wound to your reality–shall we call it pragmatism?–is this: Is that which is real everything that we have discovered up to the present and everything we will have discovered in the future?  What is the present reality of the undiscovered thing? If it is unreal because it has not yet been discovered how can we judge its necessity?

Alc.:  That is a solipsism Socrates.  You are good at them.  You yourself would say, the gods do not help us explain nature, or the origins of the world, or the reasons for sickness and health, or the circulation of the planets.

Soc.:  That is true, Alcibiades.  Humanism needs to consider only those things that have a bearing on humanity. That is the object of our discussion–to discover what these things are.

Alc.:  Then the irrelevance of the gods is included in the nature of our task.  Humanism is the discovery of what is essential to our humanity and nothing else. It does not need to consider what is extraneous [εξωτερικός]  to it, and that which has no influence over it is extraneous to it.   And if by definition the gods are immortal [αθάνατος]  and we are mortal [θνητός], to make them our object would be foolishness.  Is that about it?

Soc.:  Well said, as always, Alcibiades.  Spoken like a true Alcmaeonid: Are you wise because you are an aristocrat or an aristocrat because you are wise?  Humanity is our concern, not only what we can measure, not only what we consider real, and not the immortal gods.  Still I say, these gods exist as surely as the memory of minthe in the evening breeze when we were boys.

3 thoughts on “Did Plato Invent Socrates?”