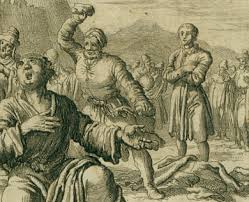 As the smoke settles in Libya and Cairo, it seems to collect in the heads of people like Jerry Coyne, P Z Myers and Eric MacDonald.

All three cleave to the quaint 18th century assumption that the right of free speech is as sacred as the Bible, a book they reject as a compendium of intellectual rot. Odd, how the freethinkers are willing to be slaves of the right pope. Sacred writ is stupid and retardant. Secular writ, that’s something else again.

The First Amendment to the Constitution–like the Second, the favorite of gun-toters–was written at a time when people could be charged with treason and hanged for criticizing the King. Its scope is now so broad that it has become the rhetorical equivalent of carrying a Smith and Wesson SD9 VE (available online) to within one hundred yards of a presidential speech in New Hampshire. Live Free or Die–your choice.

If you begin with the doctrine that Islam is evil, as Coyne and company do, then I suppose your Manichaen instincts provoke you to want to stamp it out. It’s one of the reasons the formidably smart Christopher Hitchens supported Bush adventures in the Middle East, because in terms of stamping out religion, you have to bomb someone, and on average (at least recently) Muslims behave worse than Christians.

I agreed with Hitch about so much else: but not about that. It was a cyclopic, post-in-the-eye blind spot with him. But if you begin with a more sensible proposition: that men, and many women, in the Islamic world and especially in unstable zones like Libya, parts of Pakistan, Afghanistan, Yemen, and now Egypt (following the colossal failure of the Arab spring to yield flowers) are grossly undereducated, passionate, and often irrational, the question becomes whether the United States, in its national interest, needs to test the limits of its precious liberality abroad. Our vaunted attachment to free speech and bullets (and their odd convergences) is not something we have a right to expect the Islamic masses–mainly young, mainly bored–to “get.” They have the internet, with all the offending images to get their testosterone roiling, but they could never have created it: that, symbolically, is part of the problem.

This is not 1776 or 1789. It’s 2012. If Muslims had been buzzing hornets in 1776, news of an insult against their sacred book or holy prophet would have travelled so slowly that it would have died of attrition before it reached the target.

We are not talking about insult or the right to blaspheme (which has become a cardinal right and rite among the new atheists) but about restraint in the pursuit of moral objectives. Restraint? America? Not in Don’t Tread on Me Land, where cutting someone off in the next lane is enough to get you shot.

I know that when I call a Catholic priest a child molester, or the pope a moral fascist who manipulates doctrine to control people’s sexual lives, there will be those who take offense. I also know that I run almost no risk for doing this, because (to be blunt) Christianity has just about run its course, influence-wise. It is only in the fusty, historically challenged heads of some atheists that blasphemy continues to be interesting; dissident Catholics, Catskill comedians and liberal theology sucked the real life out of parody and insult decades ago (South Park did the rest)–leaving only the odoriferous vestiges of evangelical gas as a target.

Most sensible religious people in the United States don’t care how much you insult religion–even their own–as long as you don’t actually murder the priest or harass their pastor. But reality demands that we look at Islam in a different way. Not the way poofy religious inclusivists look at it–a good faith gone wrong, ruined by subverters–but as an unstable and insecure faith that commands the affection of almost 2 billion people worldwide. That is not a population you can enroll in American Values 101: where would they all sit?

The number of evangelical Christians in the United Sates is about 70,000,000. That is a big number–about 25% of the population (and shrinking)–but it is is not a very big number, and within that number there are lots of smaller numbers: fundamentalists, pre-millennialists, Pentecostals, dominionists old and new, sectarians, and low, low down on the food chain, people like the Rev. Terry Jones and his allies.

In the earliest stages of the Libyan crisis, the Obama administration tried to diminish the effects of the viral YouTube video by saying that Americans don’t really see the Prophet as a child molester, womanizer and murderer. That is probably true–they don’t. In fact most Americans are so ignorant of Islam that they don’t know the story of Aisha or the basis for the well-worn calumny. (It goes back to the Christian Middle Ages). An equivalent claim–that Mary the mother of Jesus was a prostitute or unwed mother, for example, is not only not scandalous to many Christians outside the evangelical and Catholic camp, but a theory that looks plausible to some very good scholars. That is how different the two traditions are at the “intellectual” level, and how much alike they are at the level of extremist yahoos. But a yahoo fringe aside, Christianity, slowly but surely, has moved on over the centuries, dragging its lunatic fringe along behind it. Islam has come into modernity without actually leaving its tent.

Hard as it is for me to say it, Obama and friends were wrong: You cannot put YouTube back in the tube anymore than you can toothpaste. When it’s out it’s out: nothing can be done. But the hard facts remain: a hack named “Sam Bacile,” with the express blessing and encouragement of the Rev. Terry Jones, conspired to beam his “film”-trailer around the world. He was able to do this because he is an American who can hide behind an Amendment designed to protect people from arbitrary punishment for their political opinions. It was not designed to protect cowardly long-distance assassins and provocateurs from scrutiny.

“Bacile” like Jones’s mock trial of the Koran in 2011, becomes a hero to a thousand fools. He is defended by mobs of men and women who are committed to their own kind of terrorism–people (as I’ve already said) who will turn their gaze on the next enemy (atheists?) as soon as they create Vesuvius in the Ummah.

And he is protected by religion-hating pundits like Jerry Coyne–who each time he opens his mouth on any topic but evolution proves yet again how badly we need other subjects than science taught in our universities. The secular-atheist absolutism of people who reject controlling the sources of violence at their inception, and prefer instead to look on a row of caskets as the “price” of free speech and liberty, using hackneyed, unmodern, and useless eighteenth century slogans, is frankly insidious and pathetic.

Not only pathetic but a study in bad analogies: If I were looking for a good one for what’s wrong with letting hatemongers stoke fear and resentment, I would say that just as we require parental and legal controls to keep the worst forms of pornography out of the hands of children, and children out of the clutches of unscrupulous men, we need to accept the infantile nature of some religious views and act accordingly. That is a mature thing–a reasonable thing to do.

The permissible boundaries of pornography as it affects vulnerable populations has been tested again and again in the courts and the pornographers seldom win. We need to see the crisis in Islam as a test case in the use of visual pornography intended to incite, not as a test case in the right to voice an “opinion” or engage in blasphemy as a parlour game. But I can hear the clamber already: if you believe, as the Coynes of this world seem to, that all religion is pornography, then it follows that all religion should be controlled–and we wouldn’t want that, would we? It’s a red herring, but let me throw it at my own argument.

The suggestion that (as Romney says of Obama) that I am capitulating, apologizing tiptoeing, coddling, or missing the point misses the point by an imperial mile. The coalition of Christian crackers, dissident Islam-hating ex-Muslims, and atheists now seems to be an established fact. –A bit like the one-issue coalition of anti-abortion fundamentalists and zygote-worshipping Catholics.

It is not an alliance that can last, because the hidden fractures will grow larger over time. It may seem counter-intuitive to say that liberty requires restraint. But that is what I’m saying. To insist on the right to blaspheme and insult, at this price, beggars the morality of the right. What calculus do we use to determine the value of any principle? The Constitution? The Constitution is not a calculus; it is a list of legal commandments based on political compromises–some of them theoretical, but many just practical. It is not a primer on ethical reasoning. Once it envisaged slavery, male only voting, and the prohibition of spirituous liquors. Its infallibility is for high school debaters, young Republicans and American Legion conventioneers to celebrate–not people with a good grasp of its history and interpretation.

There is nothing to be gained from giving the abusers of free speech and the perverters of freedom the right to shoot from a distance and then claim that they were just being good citizens. Every soldier killed in Iraq and Afghanistan sacrificed for a period of time his right to do as he pleased in order to do what he was told. In the interest of peace, there is a greater good, one that can only be pursued by using reason as a measure of action.

That has always been the real strength of the west, and what has largely guaranteed its political evolution. There’s nothing reasonable about tormenting a mentally-challenged woman just to show to others how stupid and preposterous she is. But for Myers, Coyne and MacDonald, there seems to be something reasonable–if the sacred writ of the Constitution is your guide–about throwing stones at the stone throwers to see how they will respond.

Far better, it seems to me, to seek out the real evil in our midst–the “occasions of sin”–and deal with them before they leave dead bodies on the ground for which, they can plausibly say, they are not responsible.

This entry was posted in Uncategorized. Bookmark the permalink.

35 thoughts on “The Evil in Your Midst”