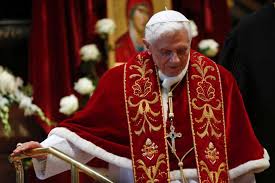 Of course I have no business saying so, but I think Pope St Francis is a bore.  From the moment he said he wouldn’t wear the ruby red slippers, I thought the guy was a fraud.  Then came the news that he’d ordered a Vespa (joke), wouldn’t live in the papal apartments, preferred washing the feet of tattooed prostitutes and criminals to those of his fellow priests on Maundy Thursday, and liked being called Bishop Francis (Why not just Jorge?)  instead of Your Holiness.

What about “Your Silliness”?   I have nothing against simplifying the world’s largest bureaucracy, being attentive to the needs of the gazillion Catholics in the southern reaches of the globe who now make up the largest active segment of the Church’s population, or eschewing the more flagrant symbols of office that Benedict XVI seemed to enjoy.  –Confidentially, though, I like my popes to look like popes and not like an ad for Clorox.  A little red as an accent colour reminds me the popes have blood, and sins, and aren’t simply parading around like perpetual virgins. 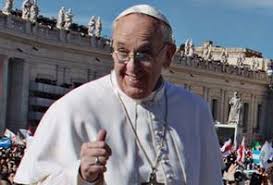 The problem with Francis is that he already looks like a guitar mass and a paper hymnal.  There is something Old Vatican II about him that makes me want to bang my head against the wall.  He has begun to sound like those Jesuits before him that gave us thirty years of tuneless tripe that tightlipped Catholic congregations refused to sing. In a scary, bad-memory kind of way he looks like those liberal priests who liked their liturgies (in the strict sense) vulgar, their chalices wooden, their genuflections optional and their altars square. For the sake of relevance OV-II style, it helped to make the congregation stand when they should kneel and put the tabernacle to one side in an ecclesiastical game of Where’s Waldo?  That is the “context” Francis fits into away down south in Argie.

The idea he is anything new just shows you how quickly you can forget about how old and stale Vatican II had become by the time Benedict XVI replaced the drooling and Parkinson’s ravaged John Paul II, himself soon to be sainted for presiding over the total dissolution of Catholic liturgy and priestly training while the rest of the world looked on oblivious (and oddly forgiving) of his sins and limitations.

What is saddest about Francis is that he may honestly believe one gesture is worth a thousand bells.  He may believe that the Catholic church is a church of the poor, or he may, more cannily, know that the future of the Church depends on a demographic that is largely poor and looks at a pope in red velvet and ermine-trimmed mozetta and sweet lacey surplice beneath as out of touch with the nitty gritty of the Church Militant—the old name for those of us here below, working out our salvation in an era of sexting and American Idol.

If Francis believes that his gestures are significant he is merely ignorant.  If he fails to recognize that Benedict brought the Church back from a forty year decline into liturgical torpor that fell past the pedestrian into the ditch of banality, then he is both ignorant and malignant. At age 74, he may be too old or too diffident or (dare I say it) too new world to realize that people like a little paprika with their potatoes, and so far he is all stodge and no excitement.  I think it was Steinbeck who said that no American thinks he is poor; he thinks he is a temporarily embarrassed millionaire.  Most Catholics, for the same reason, like a pope who isn’t afraid to strut a bit, as long as underneath the strutting they sense compassion and integrity.  To be honest, Francis is doing his own kind of strutting for the cameras, and I am not at all sure the integrity is there.

After a while, even the media are going to get sick of watching him be one of the guys.  When we see him auctioning off treasures of the Vatican Museum or trying to hock the keys of the kingdom for a sensible padlock, we’ll know his moment in the limelight is over.  But that, probably, will never happen.  Francis will be too hard pressed to find new, meaningful gestures that seem to tweak his papacy as a papacy for the little guy without really doing much of anything.  My own feeling, as a devout lapsed Catholic, is that if you’re not going to do much of anything, do it in style.

I am not sure what walk this pope is walking or talk he is talking because gestures, of course, are just that.  They cost him nothing and change nothing that may need to be changed.  The great virtue of his predecessor was that Benedict “knew” the Church in both real and historical terms.  Francis has all the marks of a diocesan ordinary who thinks what worked in Buenos Aires will work globally.  Benedict was all about recreating an authentic Catholicism that transcended the local, because Catholicism is, after all, by name and self-understanding, a global faith.

In pinpointing the life and ministry (and obsessions) of a thirteenth century monk as the way forward for the church universal, Francis runs the risk of becoming an artifact of Vatican II, a bit of nostalgia , repackaged as The Latest Thing.  Shaw infamously teased about the teaching of St Paul that the conversion of barbarians to Christianity was the conversion of Christianity to barbarity.  Francis’s determination to create a Church of the poor will impoverish the Church is ways still to be seen.

6 thoughts on “Pope and Circumstance”