I used to do a masterful rendition of the novelty tune “Bill Grogan’s  Goat” on the ukulele, which contrary to popular prejudice is a real instrument and not a fly-swatter with strings and an annoying plonky sound.

For those of you who don’t know the story of the song, a hapless goat, named Goat, has just eaten three red shirts from Bill’s clothes line. He does this, apparently, because he is a goat and goats will eat anything.   They are stubborn, disobedient, sexually compromised creatures who, if they were men, would go to hell.  Incensed by this act of reckless defiance,  his master ties him to a railroad track to meet his doom.  The train approaches at full speed, but with the ingenuity that can only be posited of a shirt-stuffed goat, Goat coughs up the shirts in the nick of time and flags the train, saves himself, and lives happily ever after. Who knows where.

The story means that we should never be punished for what we are, especially by drunken Irishmen.  Even if we are goats, salvation cometh in the morning and evil-doing  masters like Bill Grogan will lose in the end.

What does this story have to do with God?

In the last few months, the Pope who has developed a reputation for saying outrageous things, causing conservative Catholics  apoplexy and liberals to return to the fold, has said that God doesn’t slap us.  He may wag his finger at us, scold us, but he will never ever slap us. “He never, ever hurts us.”

That’s not what God does, says the Pope.  God is more like Beaver Cleaver’s dad—in fact just like Beaver’s dad.  He talks to us patiently. He encourages us. He wants what is best for us. He doesn’t inflict pain, he rallies us with furrowed brow (ouch) and disappointed sighs.  But in the end, if we are good, he smiles at us and rewards us for coming round to his way of thinking.  This God would never hurt anyone intentionally, not even a sparrow or a lily of the field. From his home in heaven, like home home on the range, he never speaks a discouraging word.   –You know the love you never got from your alcoholic mother, your distracted father, your spiteful older brother or your slutty sister? Well, God is all that love and more.

I love this God too.  Pope Francis’s God, the God that gave Bill Grogan’s goat the courage he needed when his doom was sealed, is my God.  I want to throw my arms around him and say, Thank you for being god.  I feel I can pray to you and you won’t laugh at me.  And if he has time, and happens to be listening, he won’t.

But unfortunately,  that’s not the end of the story.  I mean in some other universe in some other galaxy, there might be another God who is brutal and bossy.  A God who slaps people around for the hell of it,  In this other world, God might give orders and hurt people for not listening to his booming voice.  He might promise them paradise and give them thistles and dust and childbirth.  He might offer them eternity and then give them early death for minor offenses, like eating the wrong fruit.

A god like that would be mean enough to wash the whole human race down the tank if he was in a bad mood, but then build it up again so that they could fight wars, leave the land soaked with the blood of brothers, choose certain people as his children and tell others to piss off or study philosophy.  He probably would send typhoons and tornadoes to blow away the livelihood of the poorest of the poor just when they thought they were getting ahead.  He would send hopelessness and financial despair, and if that wasn’t bad enough he’d make people susceptible to various diseases and watch passively as they died from plague.  He would also be arrogant. So conceited that he would actually record his debauchery in a book and tell people to revere it and to cope with all catastrophes by muttering a prayer—“Thy will be done.”

And to top it off, being the kind of god who likes games—specially Chutes and Ladders– he would grow bored and send his son into the world to suffer a horrible death so that the ones who toady to his commands could live with him high above the clouds whilst the ones who have disobeyed are sent to a fiery pit for all eternity.

I couldn’t live in a universe ruled by that god. No way.  so I am very glad to be living in a world ruled by Pope Francis’s god, the one who just loves us, doesn’t get angry at gays, tells atheists they have a fair shot at heaven if they choose to believe in it—and if they don’t, no harm done–right?  I don’t know about you, but what I need is a good pat on the head from an unconditionally loving father, not a fist-in-the-face or gun-at-my head, drunken Bill Grogan of a God who gets off on violence. No thank you.

But there’s more to this than I’ve been saying, and I tremble to tell you the rest.

Occasionally people send me theological questions and recently I had one from Myron in Dubuque who wrote, “Excuse me? Are you aware that the God you are describing is the God of the Bible.  The God of my people?  This is just more of your anti-Semitic slop.”

So, I went back and looked at the Bible and I was surprised to find that, yes, if you read around in the first bit the God there does look vicious and mean.  But as I said to Myron: “The pope is the pope you silly Jew, and who is more likely to understand the Bible, a man who dresses in a simple white gown or your ridiculous rabbis with their idiot black hats and curls and strings and fringey shawls and pez containers tied to their arms swaying around like—well like silly Jews.”  In a comment, Myron accused me of lacking all decency and basic human feeling and probably not being circumcised.  “It’s people like you that explain  the holocaust,” he said,  To which I said, ‘Oh yeah?, and if your god is so great why didn’t he wipe out the German army before it happened?  Better yet, why did he let Hitler get born?” 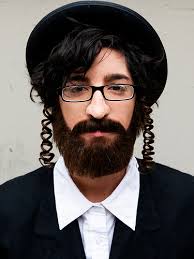 Still I was restless and confused, until the answer came to me. In fact, you can call it a revelation.

Here is my theory: At some point along the way Pope Francis’s God was shoved out by Myron’s God who visited earth several thousands of years ago, maybe as an ancient astronaut. If you read your Greek and Roman stories, this kind of thing happened all the time with gods.  Maybe he sent an avatar to do the actual fighting.  That would be cool.  Anyway, the good god was too nice to object to the evil god taking over the world, so the evil god managed to get people to worship him and made them believe he was the only God.  If people asked, ‘Where is that nice God we used to worship” he would say
“Shut up and eat your lamb and don’t touch those pigs because that’s what Greeks eat and I’m sending them to hell for worshiping other gods.”

When they kept asking,  he sent a huge flood and after that he gave them a new book all about him since the old books were too wet to be any good and no one could read anyway.

From then on, until Pope Francis, people have worshiped the wrong god. But now, with this pope, we’re getting the true story—finally.  Revelation unsmudged by the oily fingers of Myron and his tribe.  Which proves, in the long run, being nice and good pays off. Especially if you have eternity to work things out for the best.

Thank you, your Holiness, for making it so clear.  And thank you God—‘Abba’ if I may– for being—well—so darn nice.