My friend Joe Segor, whom I’ve had a couple of enjoyable evenings with in Miami, had a good comment on “A Secular Argument for Gun Control.”  He writes:

“An excellent essay. Unfortunately, it won’t convince the gun nuts. Not even those who can understand the argument. The people at the top of the NRA are there to protect the arms industry. Most of the rest have a fanatical belief in the right to own firearms. A friend of mine is rational on every subject except guns. He is beyond persuasion.”

I couldn’t agree more.  Usually I let my occasional comments rest quietly in the Comment section where they die a peaceful death in 24 hours (or earlier).  But here is what I said to Joe:

“I doubt any gun nut would make it through the first paragraph, or even stumble on the site unless they think New Oxonian is a new British micro-brew.

There is only one good analogy for the cowardice and lack of moral resolve the national government shows in the stare-down with the gun lobby.

It’s a scene we all know from watching too many Hollywood Westerns–a collage:

The good but morally conflicted tenderfoot sheriff from back East who takes the place of the former sheriff (who was last seen galloping out of town while the gittin’ was good) is trying to restore law and order to Dry Gulch. 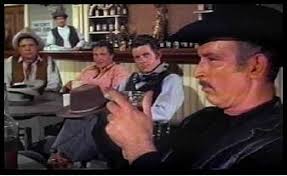 But the town is held hostage by a gang of roustabouts who shoot first and ask questions later. And prefer not to ask questions. The sheriff asks them politely to put their guns away. They spit, take a slug of whisky and knock his hat off. Then they go upstairs to visit Miss Kitty, rob the bank (again) and ride out of town to terrorize some stage coaches hauling gold from Joplin to San Francisco.

The sheriff [strains of “Do Not Forsake Me, O My Darlin’”] wags his head and wonders why some men are just plain ornery. His glance becomes steely. He reaches to his side and remembers, he’s got a gun too–a gift from Aunt Emma in St Louis when she heard he was going to Injun country. By gum, he says, I’ll do it. “Somebody’s got to! I’m tired of being pushed. I think I ought to stay,” says Will.

In the movie, there will be a showdown between the sheriff and the quick-triggered outlaw in the black hat and matching whiskers, the smartest in a gang of eight whose next-smartest member can only count to five but can shoot a rattlesnake through the eye from half a mile away.

In Washington, there won’t be–a showdown I mean–even though that sad city is just as surely being held hostage by a gun totin’ mob as Dry Gulch. And just like in High Noon, they own the law, the lawmakers and a few judges. Hell, what kind of American are you effn you don’t carry a Bible in your right hand and a gun to defend it wif in your left.

It’s even worse than I just painted it, because the guys with guns–Joe’s gun nuts– probably love High Noon and they think they’re the sheriff.  After all, don’t Gary Cooper solve his little problem because he knows how to use a gun?  And don’t it make his pacifist Quaker wife Amy look like a silly stewing woman–until the end where she gets spunky and tussles with Miller to give the marshal a clear shot and BANG problem solved.

It isn’t the gun owners we need to go after: a lot of them can’t count to five either. It’s the gang. It’s the NRA with their belief that they own the law and the lawmakers and ain’t no sheriff strong enough to do nothin’ about it nohow. They seem to be right. Where is Grace Kelly (Amy) when you need her?

Know what I think? That the best line of that paradigmatic film belongs to Martin Howe: “The public doesn’t give a damn about integrity. A town that won’t defend itself deserves no help.”  Aren’t we fickin sick of public outrage that lasts for two news cycles and then dies away?   My argument, you’re right, will persuade no one in the Miller gang.  But we have empowered them and we are too cowardly to take their guns away.  And you can’t do that with guns. Apparently you can’t do it with votes either. This isn’t Hollywood: we are caught in a real life Western. Welcome to Hadleyville–Dry Gulch.