Scipio has been nursing a cold for a week and I have been sitting by myself at Mathilde’s. I tried to persuade him to come out today and have some tea, but he says the tea they serve in the shop is actually produced by slave labour in Burma and every-time you drink it you dig another grave. I don’t want that on my conscience, so I stick to espresso.

3 o’clock just isn’t the same without him. The new barista, Erin, is the third in four months and Scipio hasn’t met her. She’s a Women’s Studies and Postmodern Culture major at the college, with a minor in Independent Studies. 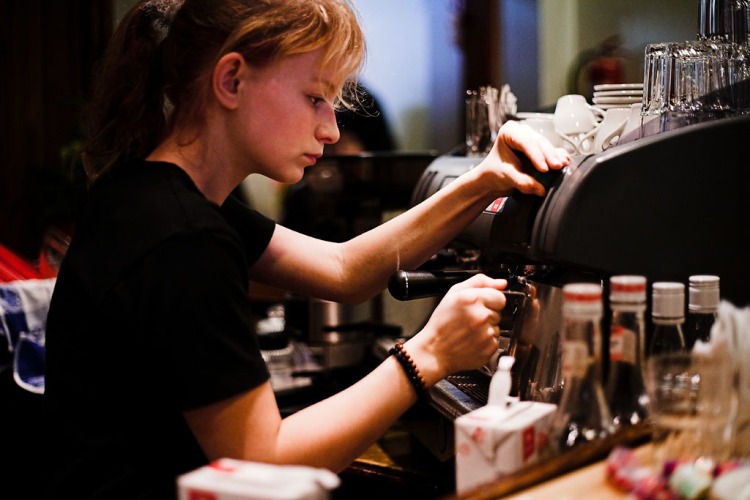 We were talking about that this afternoon.

“How do you minor in independent studies,” I asked cautiously. But she felt the challenge.

“What do you mean by that,” she said, turning that into Th-a-t.

“I mean, why not just call the whole package independent studies or call it all cultural studies or something. What’s left over for ‘independent’ studies after you’ve piled all the electives in the catalogue together?”

“You don’t have to be rude about it.” She managed to sound anguished, which is the hardest inflection in the world to master.

Maybe she’s right. I don’t mean to be rude but I was once told I had an air of tenure about me. It’s the same as being rude.

“No it’s a real question. I just think that independent studies sounds like leftovers. Why don’t we call it scrapology. Postmodern studies? Call me when we arrive at the station—Oh, whoops, the station was on the left but the train didn’t stop and it doesn’t matter anyway because no one cares. It’s the journey that matters, right?”

As I heard the words leave my mouth I could hear them thud and scatter on the floor.

She shuddered ever so slightly, like a cold bird. I was slightly surprised at her reaction. Then she moved around to the other side of the café table and made another small circle around me ending back where she started.

“Because I was just trying to see how big your world is,” she said. ‘I think I’ve got it. It’s wherever you’re sitting.”

“Ah,” I said, “that is an impressive diagnosis. Do they teach you that in independent studies?”

She suppressed a smile—it came and went like a breath.

It was a Wednesday, usually a slow day, but today the café was unusually busy, and besides Erin only a frazzled waitress cashier was on duty. A few customers were holding up fingers for attention and one was frantically gesturing for his check. Erin sat down across from me, borrowing a chair from a table occupied by a customer transfixed by his Times crossword.

“Ok, Dr whoever you are: what’s your problem? Are you one of those freaks who don’t think women’s studies is a real field. I thought the last one of you guys retired in 2005.”

I did what I always try not to do. I smirked. Smirking I’ve been told—by Scipio actually—is a defensive gesture but it always irritates the smirkee. This one was particularly obvious.

“Happy new year,” she said. “What year is it for you? I’ve never served a dinosaur before. Do you eat meat or only veg?”

“I eat slow students with my Wheaties,” I said suppressing another smirk. “And no, I don’t think women’s studies is a real field. I think it’s a pastiche.”

She looked left, but I caught it. She didn’t know what a pastiche was. I had won a vocabulary point. Vocabulary points don’t count as much as content points or logic points—I mean in the games Scipio and I play—but in a clinch they add up.

“Sounds like something you put syrup on,” she volleyed. As a rule academics immediately love someone who can turn a lack of information to their advantage that quickly. She was good, arousing even. And she was also pretty when she was challenged. I’m glad Scipio wasn’t here to watch me unravel.

“No,” I said, that would be a pancake. I don’t think women’s studies is pancakes. And by the way, who are the great women’s studies figures on the world stage? Any Nobel laureates in your future—any Pulitzers about to be announced?”

I was going to ask her if she knew what a ‘laureate’ is, but she would have said something cute, like ‘Is that a boy’s name or a girl’s name’ so I kept quiet. Besides. She was glaring.

There are times when the word glared is as good as any word to describe a look of utter, fixed disapproval and contempt. But this glare was so full of acid that I had to look down to my cup to avoid being stung by it.

“Not yet,” she said. “Give me a couple of years. You want another coffee?” The frantically gesturing customer had taken to thrusting himself forward, in little spasms, in our general direction and saying with whispery urgency Misss Missssss.

“Sure,” I said, a little surprised at her tone—no her change of direction, her taking control. It had the feel of someone who had already triumphed and was just being kind. “I wouldn’t say no.”

“Good,” said Erin checking her phone for the time. “It’s just after 5–quitting time. We can go down the street to Charlie’s. I’ll have a Sam Adams. You’ll have a James Bond, shaken not stirred—right? You buy.”

4 thoughts on “Coffee without Scipio”