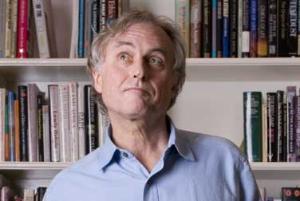 Since the publication of his book, The God Delusion in 2006, Richard Dawkins has become at least as famous as a guru for atheist advocacy as he was when he was pushing his vaguely spiritual meme theory as an evolutionary biologist.

I have said it before and I’ll say it again, Dawkins the explainer was a very powerful voice for science education and the public awareness of science—something this old world (especially this old world in America) desperately needs. Richard Dawkins the atheist is not nearly so impressive, or persuasive. And there have been times when I’ve thought he should employ a good comedy writer or unemployed logician (there must be many)–to script his throwaway lines.

“We are all atheists about most of the gods that societies have ever believed in. Some of us just go one god further.”

Presumably that 1% remainder consists entirely of the God of the Jewish/Christian/Islamic tradition. The only problem with it is that it’s too easily flipped: What Christian fundamentalist wouldn’t respond, Human civilization has worshipped many gods over the centuries, but some of us know who the one true God is. The trouble with radical monotheism is that is banks entirely on the 1%, and every self-respecting scientist knows, we only need a fraction of 1% to disconfirm (falsify) an accumulation of outcomes and assumptions.

As a scientist Dawkins knows the power of exceptions, that to falsify a hypothesis or de-axiomitize an axiom we only need an exception. The claim of the monotheistic traditions is precisely that they have identified that one exception—not only that, but almost the whole weight of their doctrine is based on exceptionalism. So it hardly helps for Dawkins to say he’s just rounding up because that’s where certainty is driving him. Where does this certainty come from, since even he agrees that the God hypothesis cannot be disproved.

The problem however is that it plays to the “statistical improbability” crowd. Life on earth may be sui generis. The improbability of this conjecture is based on what we know about the conditions necessary for the development of life, the statistical multiplicity of possible locations for it to have developed, and the fact that it has happened, as far as we know, at least once. The argument against it is that these same conditions might not exist anywhere else in the cosmos and even if they did might not have developed in a way identical to the process that would have been necessary for the beginning of intelligent life. If this argument from analogy sounds as familiar as it is weak, it is because creationists use it all the time when they use the “irreducible complexity” argument to support their belief in a world created by God. And it is small step from that to saying that since we have no example (unless it’s the cosmos itself) of uncaused effect, there is a high probability that the cosmos was created by God. It only needs to happen once, not 365 times or even 10 out of 10,000. Take that you imposter gods and unpromising dead planets. (I’m leaving the “something from nothing” debate to one side for the time being or at least until Laurence Krauss realizes that his argument for it echoes the fallacy in Anselm’s argumentative notion that God exists because nothing greater than God can be conceived and therefore cannot be conceived not to exist. Existence (or being) is not a predicate, said Anselm’s critics. If this is true, the existence of the cosmos cannot be used predicately to argue for its origin. Simple ontology.)

Many of the veterans of the Dims vs Brights phase of the New Atheist scenario will remember another Dawkins line. After a brief rehearsal of all the things religion gets wrong that science gets right about the cosmos and the origins of human life, Dawkins memed the idea that religion is the “default position” “of Dims. Since they can’t really explain anything scientifically, they have to appeal to the Big Decider in the sky, the creator God, to do the explaining for them. God is the answer to questions they find too hard to explain, or are simply too lazy to try to explain, or too stupid to figure out for themselves, even with textbooks, teachers, and long recesses. As with everything Dawkinsish, it has to be true that some religiously hyperactive people can’t explain anything–from rain to drought–without seeing the hand of the Almighty in the disaster or (more rarely) the reward or the cure. When just last week the once disgraced televangelist Jim Bakker (or is it Jimm?) was shouting his approval as a fellow God-botherer was explaining from the Bible how the California drought is linked to Biblical prophecy about homosexuality. I too think these people should be neutered, or their lips stitched shut. Fiddling with their brain would be too risky, since almost any new information would result in a system overload.

And it is precisely because these trogs still walk the earth and can fill rooms and auditoriums with their kind that atheists have to be careful of not falling into their own broth.

We know too much outside the physical sciences, to make religion, or religious training, or the Inquisition, or the condemnation of Galileo, the end and source of all evil in the world. As an historian of religion I can probably find a religious context for everything, even secular and nationalistic wars and revolutions that weren’t directly caused by religion.

But I am also realistic enough to know that if we take seriously the Feuerbach hypothesis that religion is just the expression of what we are socially, culturally, emotionally, aesthetically–then a world without religious meddling –a fully secular world—would not look much different from a world in which religion plays its sometimes abominable role. Except that in such a world—a world that might have been Stalin’s or Mao’s, to name only two twentieth century secular saviors, the moral voice against violence would have lacked the shadings of the sermon on the mount. The absence of religion may be devoutly to be wished by the atheist hordes, but the secular voice, the moral authority that would replace it, is far from settled. Dostoevsky’s nightmare was the nightmare of the twentieth and now the twenty first century.

The point is, to claim (with some justice) that religion is the default position of many people who hate science and rational explanation, is also to lapse into a kind of irrational defaulting by saying that religion is the source of the world’s ills and moral failings. It is simply a flipped generalization, but actually more inaccurate when flipped.

4 thoughts on “The Dark Sayings of Richard Dawkins”