“‘Allah’ and its Discontents: Transactional Implications of the God Concept in Islam” is a three part article available at CrethiPlethi.com  In it the correlation between the historical development of Islamic doctrine, especially the doctrine of God, and behavioral patterns in islamic violence and radical Islam are scrutinized. 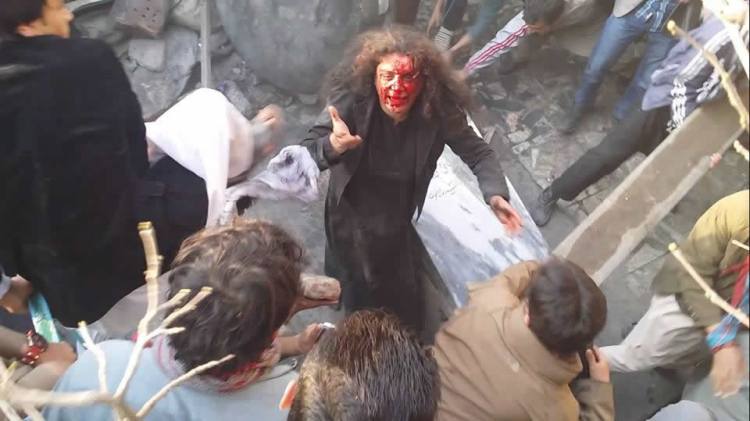 ….The cause of religious violence therefore must be recognized as specifically intrinsic to Islam and not to the persecution of Islam, the defamation of Islam by its detractors and critics,[12] or grand designs against the faith of Muslims by the western powers. The inability of the extremists to decide who the enemy is or, for that matter, what the enemy wants from them is their greatest tactical and metaphysical liability. Even the Manichean dualism which used to define good and evil in the region fails to provide an explanation when Allah’s warriors start to execute their own mothers for the crowd.

This call for the violence in Islam to be called Islamic violence, or my claim that this violence is not peripheral to “authentic” Islam — thus not dismissible as “Unislamic” — but something that is inexplicable apart from Islam may seem unpeaceable or unhelpful. The injunction since the attacks of September 11, 2001 has been Do not blame the whole of Islam for the actions of a small minority.

But unless we prefer fantasy to fact, there is simply no getting around the fact that the reasons for themorbidity we see in Islam universally, but chiefly in Islamic extremism, is only comprehensible if we look for guidance to the morphology of what Islam teaches and practices. That means its theology must be scrutinized for clues as to why certain Muslims may be doing what they believe, not based on a misunderstanding of the mandates of their religion but on a faithful respect for core, if archaic, elements of Islamic theology.

As Graeme Wood has written in The Atlantic, “We are misled … by a well-intentioned but dishonest campaign to deny the Islamic State’s medieval religious nature.”[13] Yet it is simply impossible to provide a meaningful “secular” analysis or to offer political solutions to a crisis the roots of which are embedded in the religious ideology of a foreign time and place. If these doctrines are not understood for what they are, in their strict historical context, the West runs the risk of mis-explaining the crisis to itself, while its leaders offer vacuous reassurances that all religious people are (like modern liberal Christians?) men and women of good will, that Islam is a religion of peace, and that the jihadists fighting the battle are an unrepresentative minority who are doing a disservice to the core doctrines of the faith.

Here I will focus on two core elements: Islam’s radical emphasis on the immutability of a God whose apocalyptic judgement and wrath remain live and defining features, and Islam’s lack of any doctrine of corporate contrition or moral responsibility for the ummat al-Islamiyah as a whole….

One of the key features of the book religions is iconoclasm—literally, idol smashing.  The ancient Hebrews developed a dislike for statues and images sometime in the first millennium BCE, and after occasionally reverting to worshiping them decided to prohibit them outright because their God “was a jealous god, above whom, there can be no others” (Exodus 20,4).

This was more wishful thinking than fact, since in military encounters with the many-godded nations that surrounded them Israel habitually lost to these other gods.

The Christians tried for a while to ignore their rich pagan legacy of temples and statues,  but finally succumbed to the temptation to make icons, name churches after saints, and produce thousands of images to encourage their veneration. 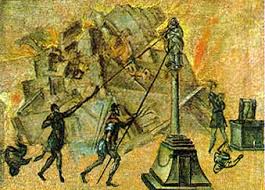 Later, Christians in the East decided to clamp down on the practice, finding it more than a little like the idol-worship condemned in the Decalogue. And later still, during…