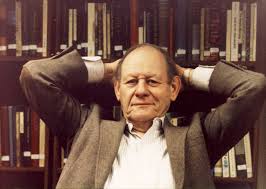 Like my relationship with my own father, my relationship with Paul Kurtz was complicated. My feelings about his death are equally complex. On the one hand, clichés must be spoken: Paul was one of the great secular leaders of the last century, and devoted more time and energy to the life-stance he called secular humanism—a humanism without gods—than almost anyone in the contemporary humanist world.  His living monument, the Center for Inquiry (and its component organizations, the Council for Secular Humanism and the Committee for Skeptical Inquiry) will no doubt feel his loss intensely.

At the same time, truth must be told:  at the end of his life, the secular vision is unfulfilled–through no fault of his own–and many of the ideas he espoused have been reformed or rejected by a simpler and more callous approach to secular humanism than Paul ever could have imagined.

It is, as they say of irreplaceable figures, unlikely that anyone will take his place.  Paul himself was keenly aware of this: as he grew older he was very much concerned that the lessons he had taught had not been fully learned  by his younger colleagues and proteges.  For thirty years, I was privileged to be one of those.  It is fortunate that another of his young colleagues, Nathan Bupp, has published in the last year a thoughtful collection of some of Kurtz’s most significant writings, a garland from the forty books that Paul wrote over his long career as a teacher, lecturer, activist, and theoretician.  They show a mind consistent in objectives and sensitive to application.  If secularism had a “great communicator”–someone who could make philosophy appealing to ordinary readers and listeners–it was Paul Kurtz.  My guess is that in terms of others discovering the importance of his thought, his best days are ahead of him.

With death, wars end, hatchets are buried and clouds resolve into clear images of the future. I personally hope that this will happen at the CFI. One thing that can be said without contradiction about Paul: he lived for the future, and lived passionately with the optimistic and “exuberant” belief that the world can be made a better place through human effort. His entire humanist vision was rooted in that belief. When he underwent valve replacement surgery at Cleveland Hospital in 2007, he confidently looked forward to another decade of engagement with the causes and challenges that most engaged him.

When he wasn’t campaigning for reason and science, he liked hearing jokes, telling jokes, and chuckling over collections of Woody Allen monologues. He loved music.  He couldn’t sing.

Paul Kurtz was never really comfortable with the “new atheist” doctrines that began to appear in the early twenty-first century. While cordial to everyone, he deplored direct frontal assaults on religion as being out of keeping with the “humanist” side of his philosophy. Authentic humanism, he believed, must be radically secular. It should expel the gods and eschew dogma and supernaturalism. It should embrace science, reason, and ethical praxis—a combination he named eupraxsophy, a recipe for the good life.

For Paul, this was not a new idea but a “stirring” that could be detected in the great philosophers going back to Plato and Aristotle. Virtue is as virtue does. Happiness is its consequence.

Some of his critics thought that Paul was too philosophical. Others, that he treated religion too politely. His final departure from the Center for Inquiry came from the organization’s decision to get tough on religion and sponsor cartoon and blasphemy contests—a contravention of the gentler approach to religion that he advocated.

He liked to boast that in the ecumenical spirit after Vatican II, he had attended two Vatican meetings as part of the Catholic Church’s colloquium on the Church’s relationship with unbelievers—a colloquium that indirectly and eventually resulted in the Vatican’s concordat on science and faith, endorsed by two of Paul’s heroes, Carl Sagan and Stephen Jay Gould. He had a special admiration for French Cardinal Paul Jean Poupard who headed the colloquium—and indeed, for smart people in general, theists or atheists. When I asked him once why he did not admire Billy Graham for the same reason he answered with a wry grin, “Because Billy Graham isn’t very smart.”

But Paul himself could be tough on religion: Beginning in the 1980’s he set out to subject religious truth claims to tests in the interest of exposing the flim flam of television evangelists and the religious right. From opposing Ronald Reagan’s “Year of the Bible” to the born-again George W. Bush’s “faith based initiatives,” he believed that religion had no place in national politics and that its abuse could only be corrected by exposing its hypocrisy. In 1982 he founded the Committee for the Scientific Examination of Religion to work in tandem with his Council for Secular Humanism as a quasi-scholarly watchdog commission. CSER was defunded by CFI in 2010, shortly after Paul Kurtz resigned from CFI.

But the difference between new atheism and Paul’s vision is crucial. First and foremost, Paul believed in education, in getting the word out to ordinary people. Like John Dewey, he believed that the liberal arts and sciences were transformative. He was not the kind of man who would divide audiences into brights and dims: for Paul, everyone who had the will to listen and learn was potentially bright and inherently humanistic in their aspirations. In literally hundreds of conferences and seminars and through the work of on-site meetings and the aegis of Prometheus Books (which he founded), he replicated the energy of the old tent revivals. In fact, some of his earliest editing work included anthologies of the puritan philosophers in American history, including the “father” of the Great Awakening Jonathan Edwards. Edwards’s goal was to deliver the saints from the devil and sin. Paul’s mission was to deliver them from religious hypocrisy.

He was a professor until the end.